We promote educational excellence within a caring environment. 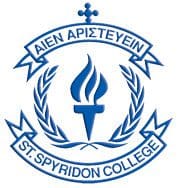 “We promote educational excellence within a caring environment”

At St Spyridon College we aim to educate our students to take their place in a rapidly changing world with confidence and success.

We endeavour to develop the whole person- strong in mind, healthy in body, endowed with love, faith and compassion, able to make a conscious and positive contribution to the well being of the broader community, our nation and our planet.

In this process we strive to provide them with the firm foundations of the Greek Orthodox Faith and Hellenic Ideals.

Academic performance is strong, with over 90% of Year 12 students continuing to Tertiary studies on completion of the HSC. To maximise HSC and ATAR results , the College offers scholarships for University Entrance, Junior School Dux, ACER scholarships for Year 7 and Year 11 entrance, as well as special programs, such as the HSC Winter Elevate and the Preparing for the Preliminary and HSC Courses. An excellent range of subjects provides access to three learning pathways: From school to University, from school to TAFE, from school to work.

Extensive co-curricular programs incorporate sports, the performing, spoken arts, and visual arts. As a member of the Independent Sporting Association (ISA), St Spyridon offers students opportunities to compete at an elite level. We are proud that St Spyridon students have represented the ISA, the State and Australia, in futsal, basketball, netball, gymnastics and swimming.

Building Leadership Capacity in every student is the aim of our Pastoral care program. The four pillars of 21st Education-learning to know, learning to do, learning to be, learning to live together, are strengthened by the cornerstone of learning to love. Our students’ community action takes them from hospices to soup-kitchens, where they develop sensitivity, conscience and a sense of responsibility for others. They engage with global issues and contribute enthusiastically to environmental and humanitarian aid programs. They participate in state, national and international youth forums, where they learn from and contribute to current debate.

Based on two campuses, the College offers technology-rich environments and purpose-built facilities for Visual Arts, Hospitality, Information Communications and Technology (ICT), Woodwork, the Sciences, Music, Drama and Sports. The new Sports and Performing Arts Centre is a wonderful addition to our facilities.

The College is situated on the doorstep of the City of Sydney and its proximity to beaches, universities, galleries, museums and the Harbour makes for a very rich learning environment.

St Spyridon College was established in 1983 and is the first Greek Orthodox College in New South Wales. Students come from 24 different cultural backgrounds.

Our Values And Beliefs

Our Values And Beliefs

At St Spyridon College we promote the harmonious development of students into intact, resilient and socially responsible persons. We believe that this is the best way to nurture students’ ability to manage the complexities of an ever-changing world.

At a simple and practical level, we premise our actions on these fundamental values:

Our education program addresses the development of the whole person in explicit and demonstrable ways.

The CROSS at the top of the emblem signifies our School’s commitment to our Lord and Saviour Jesus Christ and to His Orthodox Church.
The FLAME at the centre symbolises our readiness to share in the Light of Christ and to achieve distinction in all contests – academic, physical and spiritual.

The CREST around the flame reminds us that a just reward awaits those who strive to the best of their ability.

The MOTTO of our school is “ΑΙΕΝ ΑΡΙΣΤΕΥΕΙΝ”, an ancient Greek expression meaning “always excelling”.

The life Of Our Patron Saint: St Spyridon

The holiest shrine on the island of Kerkyra (Corfu) just off the western coast of Greece is the tomb of a fourth-century saint whose body after sixteen centuries is in such a remarkable state of preservation that every year St Spyridon is carried in solemn triumph through the streets on the occasion of His feast day.

Born on the island of Cyprus, St Spyridon preferred the tranquillity of the countryside he roamed as a boy while shepherding his father’s flocks. Even after he rose to the office of bishop he would find the time to tend the sheep on a hillside, where he knew complete contentment.

St Spyridon came from a small village which had no school.  He was exceptionally bright, but like most other people of that time, he was not taught to read or write.  However, his parents as devout Christians encouraged him to follow Christ’s teachings.  As a boy St Spyridon loved his church.  He displayed considerable religious fervour and remarkable intelligence, which enabled him to memorize long passages from the Bible.

His parents, not wanting to see his great talent and love for Christ constrained, sought counsel from their priest, who in turn arranged for the boy’s education and religious training.

Ordained a priest just after the turn of the fourth century, St Spyridon was assigned to a rural community much like the one in which he had grown up.  He made it his first act to use the church as a school for the education of children.  He convinced parents to give their children time away from their chores, to learn at least how to read and write.  His dedication to the people and his complete commitment to the Saviour did not go unnoticed.  After the death of his wife, he was appointed Bishop of Trimithous, a post in which he won the admiration of his flock and prominence in the international Christian community.  Whenever he could get away from the responsibilities of his office, he chose to return to the peace and tranquillity of the family farm.

It was in 325 that the momentous council of Nicaea was convened at the request of the Emperor Constantine to resolve the issues which were so divisive in that era.  The greatest figures of Christianity were present at the Council.  Among them was the shepherd-bishop Spyridon, whose reputation preceded him and who was therefore made one of the Principals.  At this Council St Spyridon met St. Nicholas, with whom he formed a lasting friendship.  Their lives formed a parallel which comes down to us as a glorious part of the rich heritage of Christianity.  St Spyridon acquitted himself most honourably at this meeting and was instrumental in resolving critical theological questions, which allowed for a successful conclusion to the most important Council in Christian history.

Icons of St Spyridon often recall the miracle he used to illustrate the indivisible nature of the Trinitarian God.  Squeezing a brick in his hand he drew the three elements of fire, earth and water.  St Spyridon is known for many miracles, including the turning of a snake into gold to help a poor person pay his debts, before returning it to its original state.

Like his friend St. Nicholas, St Spyridon fell victim to pagan persecution and was one day hauled off to prison, where he was so brutally beaten by the guards that he lost the sight of one eye.  Years of misery were to follow, for rather than execute him the Romans consigned him to the mines.  There the gentle saint lived in squalor and labored in agony for many years before at last he died.  Faithful to the end, his last words were in praise of the Lord.  His body was cast into a ditch from which it was taken by his friends for a Christian burial.  Later removed, his body lies intact to this day in Corfu, preserved by the hand of God.

Resilience, faith, perseverance, culture and tradition, leadership and philotomo, all virtues instilled or reinforced during my time at St Spyridon College. END_OF_DOCUMENT_TOKEN_TO_BE_REPLACED